This fabulous Exhibit of Sacred Art at the St Vincent's Gallery (located in the College) in Latrobe PA, has come to a close. I was honored with a 2nd place win. There were 311 entries from the US and abroad, 44 finalists, 1st, 2nd, and 3rd place as well as 4 honorable mentions. All work displayed were exceptional! Winners and finalists can be viewed on line. 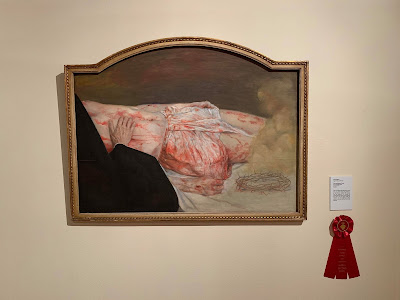 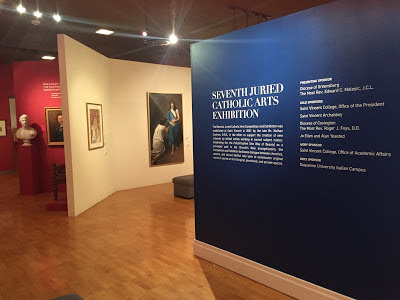 Posted by Belita William at 10:42 AM No comments:

MY 2 paintings of 2 Carmelite Saints ("Jesus and St Teresa" of Avila, and "Jesus and St John of the Cross") have permanent home together at the Church of Santa Cruz, in Tucson Arizona. They adorn the sides of the Main Alter. 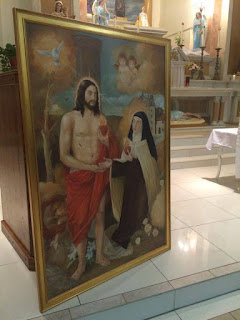 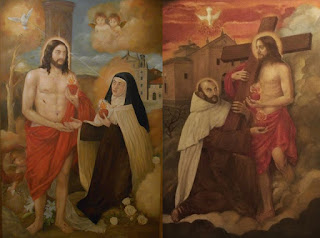 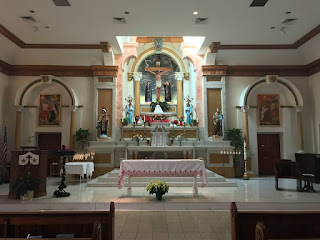 Also, my painting of "The 5 Carmelite Martyrs of Tucson" hangs in the Sacristy behind the Alter. It is the only known painting of these 5 Martyrs in existence. It is a privilege and grace to have my paintings in this beautiful historical Church. It is run by the Carmelite Friars of California, Arizona and Utah. 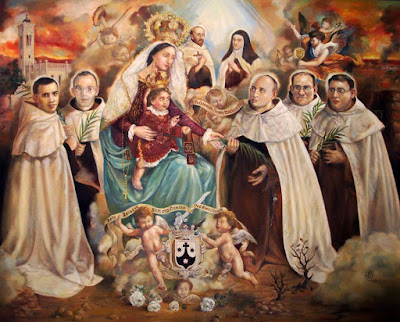 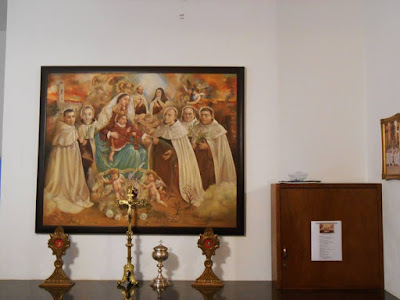 Posted by Belita William at 10:37 AM No comments:

A large painting for the Catholic Carmelite Grade School of St Therese Alhambra, Ca. It depicts the young students with their Saints and Mentors, St Joseph and Saint Therese, who are the religious guides to a holy and productive life. Pointing to out main Inspirations, Jesus and his Mother the Virgin Mary. It is 48x60 in oils on canvas and will hang permanently in the work room of the school. 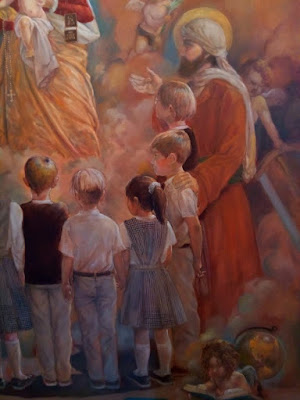 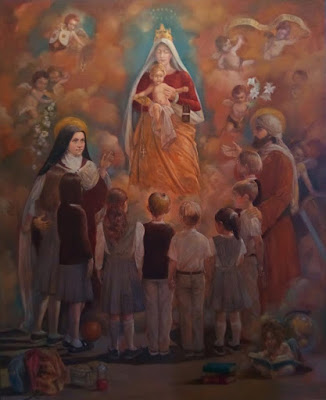 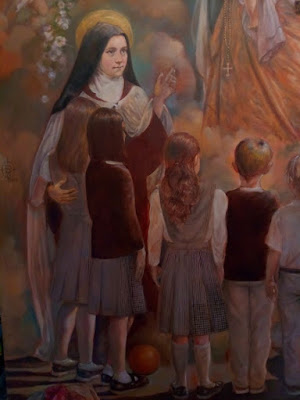 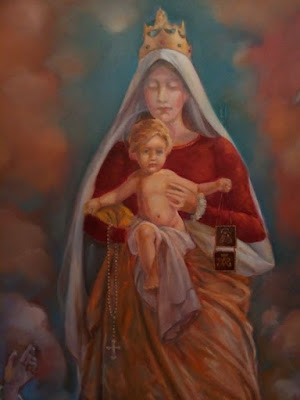 Posted by Belita William at 3:27 PM No comments:

Body and Blood of Christ

A new work ,and contemporary take on the Traditional Pieta. It is a depiction,based on an actual Passion play in Arizona, of the Sufferings of Christ ,and His Mother Mary. Her hand rests on His Body,as she contemplates the Suffering and Sacrifice of her Son ,for Mankind. The Model was a Carmelite Priest who reenacted the Passion of Christ. This work has been juried into the 2018 National Catholic Arts Competition and Exhibit in La Trobe PA. 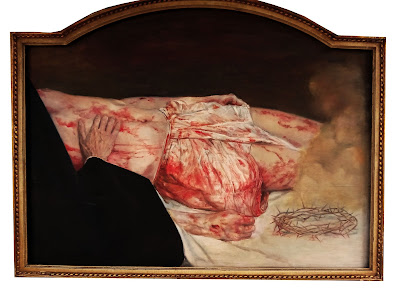 Posted by Belita William at 9:41 PM No comments:

A new painting for the Baptism room at our Church,St Therese in Alhambra Ca. It depicts the Baptism of St Therese,with her Parents (both recently canonized) and her oldest sister Marie (Her Godmother). The painting measures 38x60. There will be some changes,the Carmelite Friars will be changed to secular Priests. 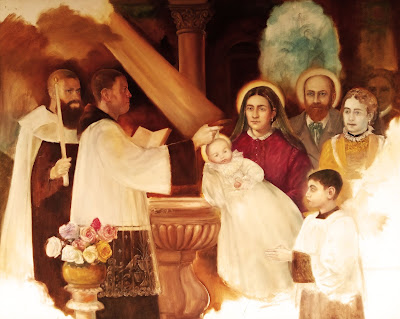 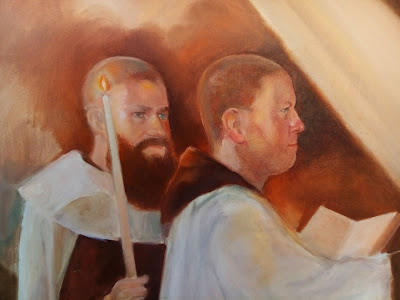 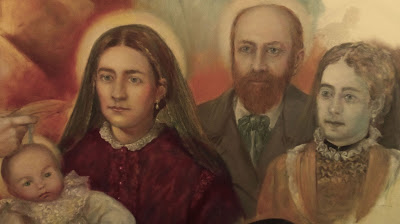 Posted by Belita William at 8:42 PM No comments:

Recently on Facebook, a new friend sent me a photo I had never seen. It is a photo of me and Moe Howard of the Three Stooges and a portrait I painted of him. He is an avid Stooge fan and came across the photo. I was 16 years old at the time and visited him in his home (where the photo was taken).  Also the same week, in a coincidental unrelated  encounter, I got an e-mail from the Great-great Grandson of Larry Fine of the Three Stooges, named Kurt Lamond who for years was searching for the Artist of Larry's portrait!

We ended up meeting over Lunch and learned about much Stooge trivia and getting to know a super guy! His Grandfather was actor and TV host, Don Lamond. Don appeared in many Stooge films and hosted a Kids TV show, which I made an appearance on in the 60s, showing Stooge Art! 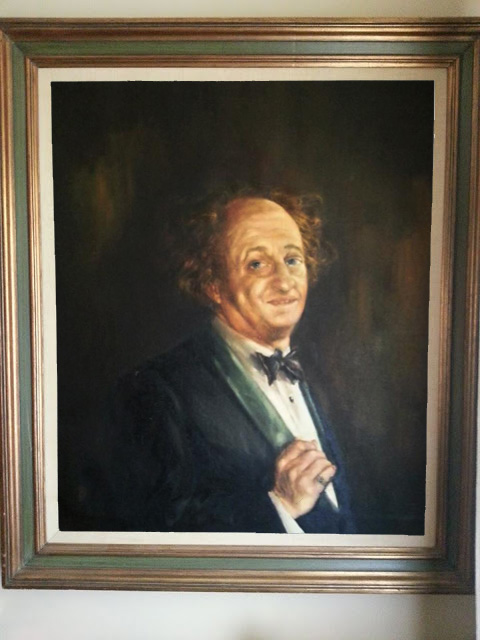 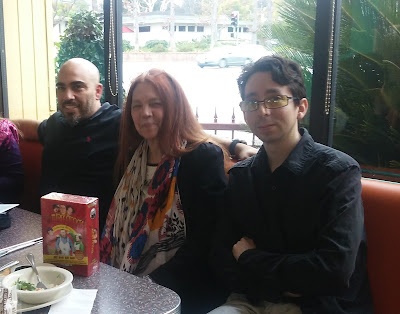 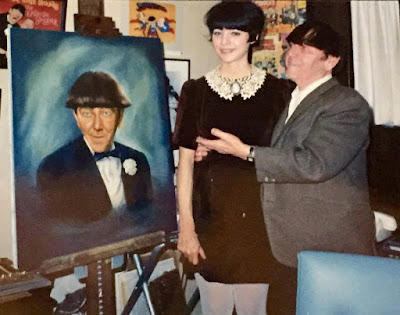 #BelitaWilliam #ThreeStooges #Moe #Larry
Posted by Belita William at 11:02 AM No comments:

My latest commission is a portrait of the French Carmelite Nun, Blessed Elizabeth of the Trinity ,who will be Canonized tomorrow in Rome. She wrote many Spiritual writings and after taking her final vows developed Addison's disease, which at the time had no cure. A painful ,slow death followed, yet she accepted her suffering as "Gods Will". She died at the age of 26.  This painting will participate  in celebration at St Therese Catholic Church in Alhambra, on November 6th. It will be a special Thanksgiving Mass, celebrating her Canonization ,along with 5 other saints, in Rome this October. Celebrant will be Archbishop Jose Gomez of Los Angeles ,who will bless the painting.  This event will be televised live by EWTN. 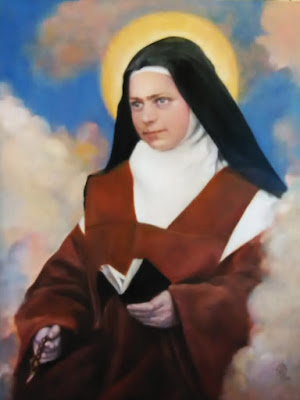 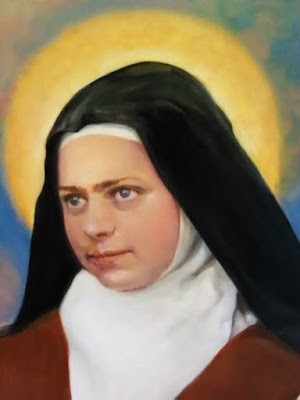 Belita William
San Marino, California, United States
Hello everyone....I am currently re-entering the world of art after a long absence. I was sort of a closet artist. When I began, realism was not too popular and only used in commercial art. No gallery would even take it! Now with the resurgance, I feel right at Home! I am glad to see so many new and beautiful works of art. Especially all the new artists. May we reach new hights with this "New Renaissance!!!" You can view my portfolio at http://www.belitawilliamart.com/